The earth is damp and aromatic with the rich scent of early spring. The day is unseasonably (unreasonably) warm—11 degrees at the very beginning of March—and that warmth is predicted to hold steady through the next week at least; it could very well be the end of the winter already. As the sun sinks into the western horizon the sky takes on the surreal effects of the atmosphere before a summer storm: steely blues suffused with pale yellow and a hint of green, dissipating into the warm glow of rich pinks and oranges embroidered over bottomless cobalt.

It was a pretty funky day.

The traditional frost free date for Edmonton is around the second week of May. Cold frames push that date several weeks earlier in a normal year; in one with a super El Niño keeping temperatures blissfully mild most of the time, well—the beginning of March is a perfect time to get some seeds in the ground.

A couple weeks ago we covered two of the back garden beds with cold frames: two old, heavy salvaged glass doors. We rigged them into a crude, slightly angled frame with some scraps of wood. It’s inelegant but it works. 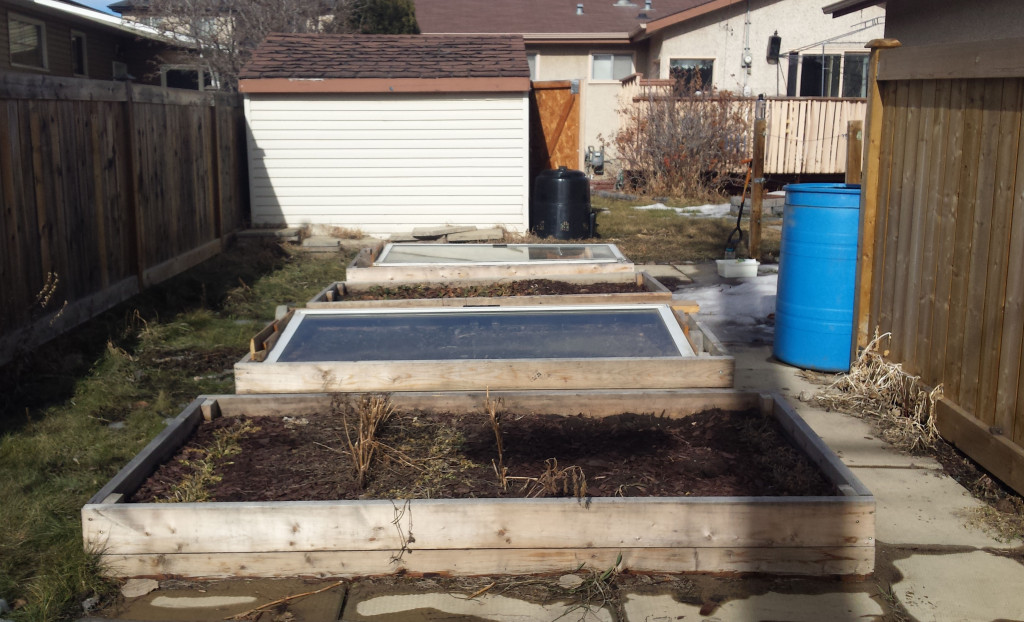 Despite the few significant dips in temperature over the past two weeks, the relatively mild weather was more than enough to thaw the soil under those frames, except for right up along the edges that aren’t covered by the glass. In comparison, the two other beds are about halfway there—the top two inches are fully thawed but below that is still frozen. If the weather patterns continue (and there seem to be no signs to the contrary) we’ll be able to sow those beds by the end of the month.

To our surprise/delight, the garden beds up against the house were also completely thawed. Actually, the soil wasn’t just unfrozen, it was also bone dry. But it makes sense: they’ve got full southern sun exposure and have the added benefit of the ambient heat radiating from the house. Indeed, the problem with those boxes is that they are too hot—the soil dries out so fast. Last summer I had planted a variety of squashes in them, but after shooting up super fast and vigorously, ultimately only the acorn variety (“Celebration” from Veseys) managed to survive; the rest just dried all out.

I’ve got garlic in half of those beds, and then added some peas to the rest today. I flooded the soil with the hose and then dumped a solid layer of snow overtop: as it melts over the next couple days, it’ll more thoroughly hydrate the soil than the blast of liquid water I gave it today.

This is the first time we’ve used cold frames, though I’ve been well aware of their ability to extend the growing season well into the late fall/early spring. It was really a matter of practicality: we’ve had only two summers in this house and have been taken slow, steady steps—instead of blazing forward half-cocked like we did in our other houses, expanding the garden way too rapidly and without any forethought. If there’s one thing I’ve learned, it’s that ripping up your lawn and throwing some seeds into the bare earth is a really, really bad idea. Weeds upon endless weeds; completely unmanageable. A garden parcelled out into tidy little boxes is just so much easier to manage.

We’ll be taking a significant step this year, now that we’ve got a good handle on things: not only did we finally get some cold frames in use, but we’ll also be adding garden beds in the front yard as well as few more in back.

And, if all goes well at city council on Monday, we’ll be adding a flock of chickens as well. The garden shed is the perfect size for a coop and could be quite easily converted into one. It’s disappointing that the city has decided to institute some extra red tape into the process—building permits and all that—but I’m still pretty confident the bylaw will be passed.

Until then, I’ll be watching the small but heartening changes in the yard—the first intrepid sprouts, the rapidly melting patches of remaining snow, the lengthening daylight.

I’m a wine writer, theatre reviewer and former alt-weekly editor in my hometown of Edmonton, Alberta. I’m also an astrology student. On this site you’ll find a little bit of everything. Lately I’ve been focusing on wine and astrology.

Visit the Portfolio page for some of my recent writing credits.