Democracy on stage at the Citadel’s Fight Night

I can’t think of a better show to see this election season than Fight Night, an odd theatrical experiment by Belgian theatre company Ontroerend Goed, part of the Citadel’s Highwire Series. (OK, except maybe E Day.)

Fight Night feels more like interactive performance art than theatre. Actually, it kind of feels like an episode of Black Mirror come to the stage.

The premise is simple: there are five “candidates” and the audience votes for their favourite, using a small voting device handed out before the show. The host, the charismatic and appealingly sardonic Angelo Tijssens, helps the audience learn the technology through a short series of demographic questions that are already revealing and give some flavour of what’s to come. On the night I attended, the crowd was comprised mainly of older (60+), wealthy (monthly income $5500+) women (63% of the audience).

The contest is the candidates themselves and we aren’t told for what they are competing; they are simply our “representative.” Questions are posed to the candidates and the audience goes through several rounds of voting, eliminating one candidate after each round.

It’s the farthest thing from a sure race – the candidate who was in last place after the first vote ended up winning. Or it seems that way, anyway. The outcome should be determined by the whims of that night’s crowd, yet there were clear machinations at play that the audience could sometimes see coming, which twisted things in favour of one or another candidate. The audience was powerless to stop these things from happening and our “voice” – that single vote we each possessed – was only one in a crowd. Is it still your voice if the only things it can say are him or her, A or B, black or white?

Such is Fight Night’s subversive appeal: it neatly strips away the facades behind the democratic process, as well as the data supporting one “fact” or another.

I can’t say much more than that because I don’t want to give any spoilers. So much of the impact of the performance rests on the surprises and revelations of how it all plays out.

I can say that it often didn’t feel like watching a theatre show. It’s so interactive that it’s more like some kind of weird, dark, reality TV game show. The actors were performing, of course, but it didn’t feel that way. Rather, it felt off-the-cuff, like they really were just a group of people talking to a crowd and trying to win them over. 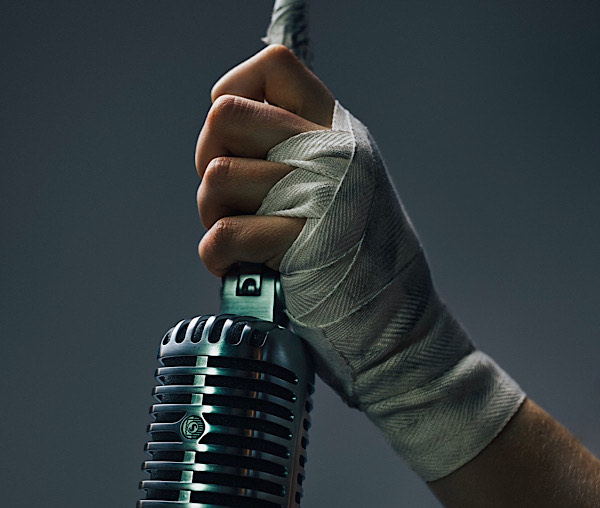 A subtle soundscape builds as the show progresses: a low but persistent, harsh, electronic distortion that was maybe a crowd chanting? That’s how my brain interpreted it, anyway – like a crowd of protestors chanting in the distance. I saw this on the eve of the Greta Thunberg-led climate protest in Edmonton (and with the federal election only days away), so that sure felt appropriate.

Again without giving any spoilers, I ended up leaving my seat. As amusing as that was – how many theatre shows end like that! – I left feeling deeply unsettled.

I kept telling myself that the show would have a very different impact in a room of millennials, or Gen Z. Or would it? I was mostly a minority in the crowd – other than being amongst a majority of women, I am younger and make less money than the average person who was there. Given how it played out, and even though it was a theatre show and not real life, I couldn’t help but feel a bit angry and disconcerted. The whole thing will have you questioning the fundamentals of our supposedly democratic system and what a vote actually means, or doesn’t. It’s also excellent for making you deeply mistrustful – and a bit resentful – of your fellow voters, if your vote isn’t among the majority.

There are a few shocking moments and revelations, though as a whole these were still relatively tame in comparison to literally any political circus currently happening around the world right now. Judging from the gasps and nervous whispers in the audience each time one of the more provocative questions was posed, however, these prods still had a big impact on this particular crowd.

I mentioned that the show felt a bit like an episode of Black Mirror, which is true – but a very watered-down version; there was nothing super violent or warped here. The show’s subtleties are pernicious, though, and there’s a quiet horror to the proceedings. I think some people could find the show outright upsetting and not funny or entertaining at all. The very first question posed to us – “Are you a man or a woman?” – is provoking enough. How would a trans person feel when asked that question, and how would they vote? Would they even vote? What good is a voice if it’s not actually yours?

Fight Night is a fascinating exercise to play with your fellow Edmonton theatre-goers. Go see it while you can.

And if you end up on stage – welcome to the club, my fellow anarchists.