This is my 12th year reviewing Fringe shows and I’ve got a well-rehearsed opening night routine. I head to the Fringe grounds (via ETS – seriously just don’t try to drive to the Fringe) a little earlier than the first performances. First stop is the box office in the Arts Barns to pick up my stack of tickets and have a quick chat with whoever I happen to run into (hi Paul!).

Then I walk around the grounds and check out this year’s Fringe geography, paying attention to where all the food and craft vendors are, and see what’s new (ooh, vegan bowls! hmm, poop art?). Fringe meal planning ensues. Top runners so far? Spaghetti in a cone and craft cocktails in a can. SIGN ME UP.

The layout really hasn’t changed too much in 2019, not like some previous years. One of the biggest changes was when they moved the north beer tent from right behind the Arts Barns to a spot further up the streetcar tracks. That move made sense from a logistics perspective and it did relieve foot traffic in that area, though I still miss the old location underneath the elm trees draped in twinkly lights.

Last year’s relocation of KidsFringe to the Strathcona Community League – where it is again this year – was also a big move, though it had less of an impact on the main grounds since KidsFringe used to be tucked away on the very north end. So 2019 is pretty much business as usual in terms of where everything is at. 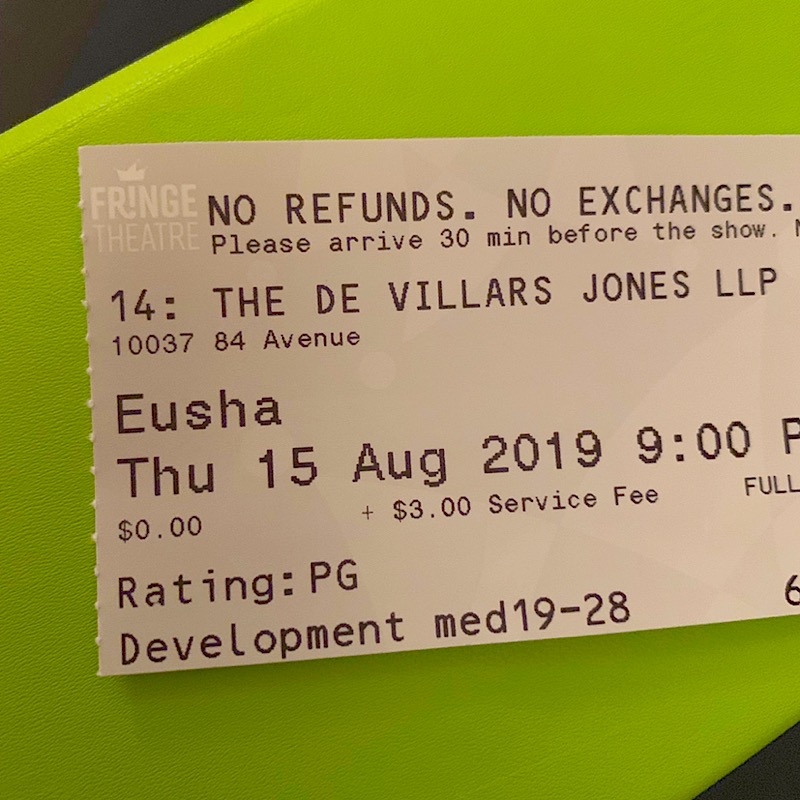 My first show, Eusha, was in the basement of the Holy Trinity church – the scene of the crime, so to speak, for the Fringe’s big drama this year. I don’t have much to add to the conversation on that, other than what I already summed up on Twitter. Regardless of your opinion on that ordeal, don’t let that discourage you from attending the shows in that space.

Here’s my review of Eusha, which will also be published in the Beer Tent Reviews zine (available at the Fringe beginning on Wednesday).

EUSHA
Blinking once for yes and twice for no, the audience becomes a grievously injured car crash victim in this quietly disturbing modern gothic tale. The titular Eusha is our nurse, played convincingly by Elisa Benzer. Benzer’s script unfolds briskly, keeping the audience engaged as it unspools the mystery of why we came to be under Eusha’s care. While the script isn’t particularly surprising (the program description also verges on being a spoiler), its poetic imagery is provocative. Benzer’s performance matches the narrative’s oscillations, moving from compassion to mania as she delivers transcendent descriptions of the soul, time and the universe in between lurid accountings of grisly medical details. Horror fans will like this one.

I’m a wine writer, theatre reviewer and former alt-weekly editor in my hometown of Edmonton, Alberta. I’m also an astrology student. On this site you’ll find a little bit of everything. Lately I’ve been focusing on wine and astrology.

Visit the Portfolio page for some of my recent writing credits.