Media passes and the Edmonton Fringe

Should a written review be attached to every media comp at the Edmonton Fringe?

The Globe and Mail just ran a very interesting story about a controversy that started at Edmonton’s Fringe Festival and continued into the Vancouver Fringe. It concerns media passes, specifically whether or not people who see Fringe shows using a media pass are obligated to write a review of every show they see.

As someone who has seen hundreds of Fringe shows using a media pass, I have a lot of thoughts on this subject. (That’s your warning to go get a drink or a snack and settle in before continuing – this is a long one.)

I agree that the “one media comp = one review” is a transaction that should be upheld as much as possible at the Fringe. If you use a media pass to go see a Fringe show, you should try to write something about that show. A review is ideal, but it’s also beneficial to Tweet about it, post on social media, mention it on your podcast – something.

However, I don’t think it needs to work this way every single time. Different forms of media coverage can be just as beneficial as a review and good promotion doesn’t always translate to more reviews. (Which, by the way, could be bad reviews – and artists sure don’t like it when media get free tickets to see their shows and then write negative reviews. But that’s a different topic.) Unfortunately, general media coverage is less tangible and quantifiable than a written review, so it’s not easy to immediately see the value of it.

For my part, I admit that I have not always written a review on every single Fringe show for which I used a media pass. In the Globe story, arts writer Marsha Lederman argues that she likes to see as many shows as she can “to find breakout talent, see work that might fit into future stories, inform [her] general view of the Fringe.” I agree with this and have used my media pass in the same way. I believe that so long as you’re covering theatre regularly throughout the year, you’re upholding the general spirit of a media pass. Lederman certainly qualifies; it’s pretty shocking (and kind of hilarious) that the Vancouver Fringe wouldn’t give a media pass to the western arts correspondent for the bloody Globe & Mail, for heaven’s sake.

If I’m going to use a media pass for a show and I don’t plan to write about it, it’s usually at the tail-end of the festival when a review wouldn’t be of much use for show promotion. Yes, I know that many shows would still want a (glowing) review even on the last day, as reviews can provide valuable feedback for the artist and may also be useful if the show or performers come back next year. But I also don’t give star ratings anymore and this argument mainly applies only to shows that would get a 4- or 5-star review, which they’ll turn around and hawk on their posters and handbills next year. (Do you really want me to publish a review of your show on the last day of the Fringe and give it 2 stars? Probably not.) 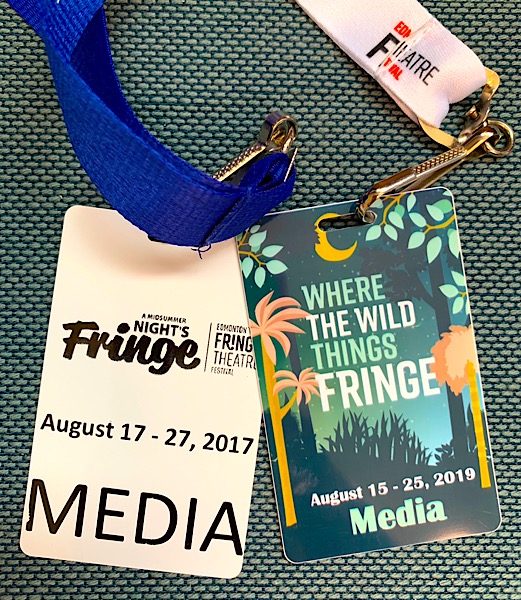 One of the biggest points of contention in the Globe piece was from artist Melanie Gall, who complained about a blogger who attended Gall’s show Opera Mouse in Edmonton with her two children, using a media pass to cover those three tickets. As the story reports, Gall complained: “She got a free show for her family. Someone saying they’re media and getting a free day out for her children, that isn’t right.”

I was a little perplexed by this, for a couple reasons. First of all, bloggers are media. (Hi! You’re reading this on a blog.) Second, my understanding was that Edmonton Fringe media passes only let you book one ticket per show – you can’t book multiple tickets for the same show under a media pass; the system just won’t let the transaction go through. The Globe story quotes Catherine Bangel of Bangel PR – who handles all the media and publicity for the Edmonton Fringe – as saying that they issued 53 media passes for this year’s festival and only handful went to “social media ambassadors that covered the festival from more of a lifestyle perspective and didn’t publish reviews for any show.”

To clarify this, I contacted Catherine. She explained that she reached out to both Family Fun Canada and the Alberta Mamas to bring more attention to Kids Fringe this year, which often gets lost in the sea of general Fringe coverage.

“They certainly worked for their passes, as all our reviewers do,” Bangel wrote in an email. “They did numerous blog articles, Instagram stories and posts on Facebook and Twitter, raving about all the offerings of Kids Fringe and the fun they had. And in many of them, they even reviewed the show they saw on social media, in exchange for their day to take in Kids Fringe.

“Family Fun also does a Global Edmonton sit-down interview about things to do with families in Edmonton and they included the Fringe,” Bangel continued. “We feel that this actually had way more reach than traditional media, because it was targeted to an audience of families looking for things to do in Edmonton. Both blogs have reach and a dedicated, engaged following.”

Bangel provided the Family Fun blogger a mini-Fringer pass, which is different than the standard media pass that is restricted to one media comp per show. This is how she was able to book three tickets, for her and her two children (the blogger has twins). I actually think this was a great approach to providing more coverage to Kids Fringe, and I also think that it only makes sense to take kids to see Theatre for Young Audiences (TYA) shows – after all, that’s who those shows are for. I know that in past years, editors at the former alt-weekly papers would spring for an extra ticket so that the reviewer covering the TYA shows could bring their kid.

That said, I usually don’t agree with giving media passes to non-arts bloggers or social media influencers, unless there’s a very specific target in mind (like this example of Kids Fringe). I just don’t think the Edmonton Fringe itself needs much promotion on a general level. I mean, come on – everybody knows about the Fringe in Edmonton. For many, it’s the only live theatre they see all year. Giving away media passes to someone who’s only going to post Instagram selfies eating green onion cakes is not doing anyone any favours. 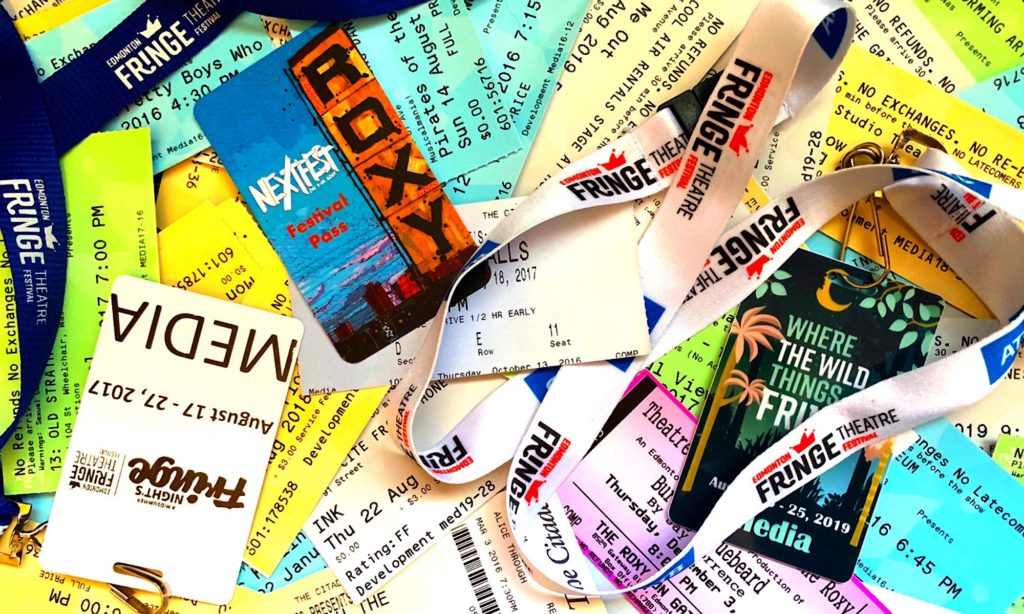 Media passes aren’t really taking money away from the artist, either – not unless it’s a sold-out show and the media comp is actually taking the spot from a paid ticket holder. (And yes, I know this happens occasionally.) I would even go so far as to suggest that media comps can actually bring money in to shows – there have been many times when I’ve dragged various friends and family members to join me at shows that I’m reviewing. That’s an extra paid-for ticket that wouldn’t have been sold otherwise.

One more thing to consider: a number of media passes are given out to jurors of the Sterling Awards. Each Fringe, these folks see dozens of shows and then cast their votes for Sterling nominations. These media comps often don’t end up materializing as a written review, but it’s entirely possible that a show might end up with a Sterling nomination in a few months, instead.

There are probably some people out there thinking, “Screw the media and these entitled bloggers! Make them all pay for everything!” Sure, that might sound like the fairest approach – and then watch as all the reviews and media coverage evaporate. I have lost money on every Fringe that I’ve covered. A ticket to a Fringe show is $13 to $16. The standard rate for a Fringe review in Edmonton is $10 – that’s what the alt-weekly papers paid back in 2008 when I started, and it’s what the Beer Tent Reviews paid this year in 2019. (Theatre reviewing is not adjusted for inflation, unfortunately.) Of the princely $60 that I earned reviewing shows this year, I’m pretty sure I spent all of that in the first two days, buying food and drinks and Ubers home. So, artists aren’t the only ones losing money at the Fringe. 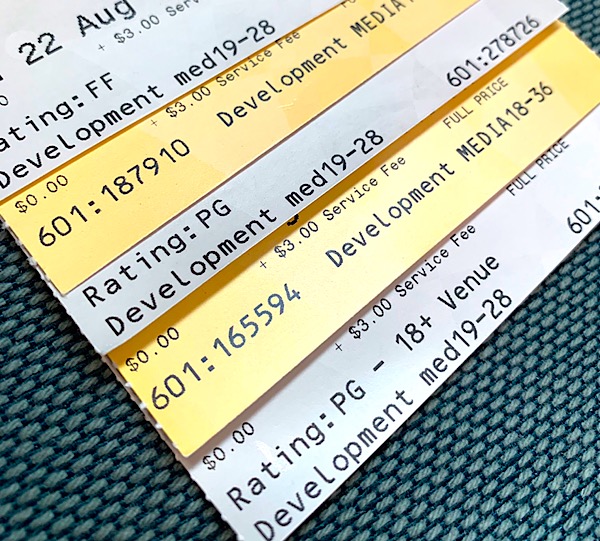 I was expecting some fallout like this due to the departure of VUE Weekly. In the past, VUE put up a review of every show. That didn’t happen this year because VUE is gone and the only thing filling the gap was the Beer Tent Review team that I was a part of, a smattering of local bloggers, and then the usual mainstream coverage like Postmedia and Global News. So a lot of shows didn’t get reviews this year, for the first time in a very long time. This sucks and I wish there were more reviews, too. New players are filling in the void that VUE left in Edmonton’s arts community (ahem like a new local theatre podcast ahem). But it will take some time, and it will never be like it was.

Ultimately, I think that where the Fringe is concerned, media passes should be handed out judiciously – and used respectfully. From my perspective, that’s what happened at this year’s Fringe. If you disagree, I encourage you to reach out to the festival to make your voice heard.

Personally, I think the fundamental problem at the heart of this debate is that the Edmonton Fringe festival is way too big. But that’s a huge subject for another day.

Subscribe for updates on Edmonton theatre, arts and culture:

I’m a freelance writer and astrologer in my hometown of Edmonton, Alberta. On this site you’ll find posts about astrology, food, wine and culture.

Visit the Publications page for some of my recent writing credits.

Visit the EarthShine page to book an astrology consultation with me.

Book a Consultation with Mel