There’s going to be a witch in a church in Old Strathcona tonight, though she’s not the kind who wears a lot of black and posts Instagram selfies with crystals and tarot cards. (OK, maybe there will be one of those – I don’t know who’s going to be in the audience.)

The Witch of Edmonton debuts tonight at the Holy Trinity Anglican Church, a staged reading that’s part of Malachite Theatre’s inaugural Winter Shakespeare Festival. (I reviewed the festival’s production of Julius Caesar earlier this month and I also spoke with festival artistic director Ben Blyth on this episode of the podcast.)

This is an old play, written in 1621, not by Shakespeare but by three of his contemporaries: William Rowley, Thomas Dekker and John Ford. The version going up at Holy Trinity was adapted by local artist John Richardson. He changed the setting to our very own Edmonton here in Alberta and filled it full of references to our fair city on the North Saskatchewan. (The Edmonton of the original play is Edmonton, England – now part of the city of London but once a rural area. It’s the namesake of our city and I wrote about that in this story for Taproot in 2019.)

Richardson also adapted another Shakespeare-adjacent play for the festival: The Merry Devil of Edmonton. The author on that text is unknown; it’s part of the Shakespeare apocrypha. For this one, Richardson had to add a fair bit to the text to make it coherent, as the text that has survived to the present day is garbled and incomplete. He updated the references to Edmonton, Alberta in this play as well. The Merry Devil will have its own staged reading next week, on January 29th.

It’s a real treat to see these performances and hear these texts, as I think it’s safe to say that we will not get another such chance for quite some time, if at all.

Mel: Tell me about your background – you’re not a stranger to older texts.

John: No, I’m not. I long time ago I did a Master’s Degree in Anglo-Saxon poetry. I’ve mucked around with old texts for a long time.

M: I read on your blog that you discovered one of these plays in a bookstore on Whyte Ave.

J: Yes, at The Bookseller. It’s just two blocks from my house and the owner has a shelf behind the counter where he keeps books that he intends to aim at me when I come in. One of the books that he aimed at me was a set of five Elizabethan comedies and one was a title I’d never seen before, The Merry Devil of Edmonton. I thought it was odd that I’d never heard of it and then I read it and thought, “Why hasn’t anyone produced this?”

From that play, I learned about the other play that I adapted, The Witch of Edmonton, which is a little more known in the larger English-speaking dramatic world, but it’s never been produced here either. I’ve been quietly badgering anyone that would listen for about 10 years, and finally the Malachites listened.

M: These plays seem like a good fit for the Winter Shakespeare Festival because they are Shakespeare-adjacent.

J: If you bother reading the introduction to a volume of Shakespeare, it talks about the historical period – what’s going on in the period, who the queen or king was. But we aren’t terribly aware – except for Marlowe – that Shakespeare was in this big, vibrant theatre world where there were dozens of playwrights. I went to the opening night of [the Winter Shakespeare Festival’s] A Midsummer Night’s Dream and I thought, “Oh my goodness, there are so many echoes of those other plays.” They were all working within a kind of thematic vocabulary. There are types of characters and situations that come up outside of Shakespeare, and we don’t usually see that he’s got a much bigger world that he’s a part of. 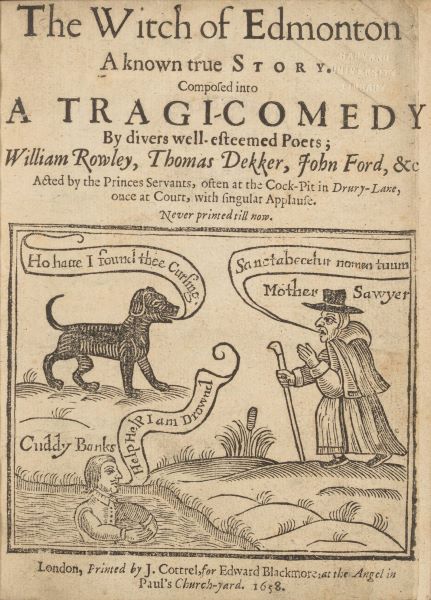 M: Tell me about the authors – The Witch of Edmonton has three and The Merry Devil has none.

J: Yeah, nobody knows who wrote [The Merry Devil] or what group of people wrote it. For a while it was attributed to Shakespeare. But Shakespeare’s attributions have gone all over the place. If you look at the latest series of Arden Shakespeare, they’ve got a whole lot of new plays, which are ones that Shakespeare collaborated with somebody else on. There was an awful lot of collaboration back then, which shows up in The Witch of Edmonton because it has three playwrights.

M: The Merry Devil is called a “flawed text” – why?

J: It’s an incomplete text; it’s kind of incoherent. Things have been lost in transmission. Part of what I did for the adaptation was writing a few extra scenes, just to try and tie up all the loose ends. The last time we read it through, a few weeks ago, I had trouble telling which parts were mine and which parts were the original ones – which was kind of nice.

The problem I had with The Witch of Edmonton is that it’s about a two-and-a-half hour play and I had to cut it down to 90 minutes. It was very painful because there’s some amazing poetry and the speeches of the witch, Elizabeth Sawyer, are just brilliant things. It was very difficult to cut anything out. It came down to cutting out single words.

M: The Edmonton area of England was known for being a spooky place back then.

J: The Edmonton region was very rural and very poor. It did have a history of odd goings-on. There was one case, 20 or 30 years before Elizabeth Sawyer’s trial, where a group of men were apparently conducting some kinds of rituals in the woods at night and one of them was actually captured.

There were people doing funny things. The heretics hung on for a long time – the church called them witches or whatever. Being rural but still close to a big metropolis that had international trade, it was a place where there were funny goings-on anyway, which could be construed as witchcraft. There were certainly alternative forms of Catholicism.

James VI, Elizabeth’s successor, was a big fan of prosecuting witchcraft, and there was a resurgence of persecution of witches basically driven by the interests of this Scottish king. In the play, there’s a sense that the educated people in London didn’t necessarily think witchcraft was a real thing, but the people out in the rural areas were quite happy to say, “Well I don’t like that person; she’s a witch; burn her.” And that’s probably what happened to Elizabeth Sawyer.

J: The idea of being able to mob somebody – that’s something that social media has helped us do with great abandon. That’s basically what happened to [Elizabeth Sawyer]: her neighbours turned on her and that was the end.

The Merry Devil is much lighter. It opens up like it’s going to be Doctor Faustus: Peter Fabell, the Merry Devil – who may have been based on a real person – is playing a trick on a demon so that he may have seven more years without having to go down to hell because he sold his soul. It’s very dark at the beginning, but then it becomes this funny comedy of the younger generation trying to outwit the older generation.

M: You changed the setting of both plays, too?

J: I changed both of them so that instead of being set in early Renaissance England, north of London, they’re set in Edmonton, Alberta. Both plays have references to actual places, most of them in Old Strathcona: the poachers are trying to poach deer in the Mill Creek Ravine. I really hesitated about doing it, but I think it works. There were a lot of laughs amongst the cast on the first read-throughs from the local references.

M: Neither of these plays get staged very often.

J: The Witch of Edmonton is much more well-known; it gets produced pretty regularly. But with The Merry Devil of Edmonton, a lot of potential companies would think it was too confusing to deal with; it’s too much of a dog’s breakfast of a text.

M: Right, because you had to add to it.

J: I didn’t make anything up. An awful lot of the story of The Merry Devil of Edmonton was published as a chapbook with extra stories. So I took some of those incidents and put them into the play.

M: What are your hopes for the future of these plays?

J: I would love to see either or both produced in Edmonton. I think it makes sense. The theatre community, on both sides of the footlights, is certainly at a place where we can move beyond Shakespeare and find other things.

Edmonton, right now, is bigger than London was in Shakespeare’s time. So if Shakespeare’s plays, and all the others that were there at the time, could be supported by little old London, then Edmonton could have audiences turn out for all sorts of other plays. I’d like to see a broadening of the classical repertoire around here, as well as all the great new stuff that gets produced. It’d be good to have a balance of old and new.

This interview has been edited for length and clarity.