Though it still seems early in the year, gardening season is well underway in Edmonton. Last Sunday I bought a number of seeds from the annual Seedy Sunday, mainly from Harmonic Herbs—a 15-acre farm up near Barrhead. I picked up some veggie cultivars, both common favourites and some more unusual things I haven’t tried yet, as well as a few medicinal herbs (skullcap, valerian, borage). All the seeds are non-GMO and open-pollinated, meaning if you just let the plant do its thing, it’ll go to seed naturally (i.e. without any human meddling) so you can gather up a fresh batch of new seeds at the end of each growing season. It doesn’t always work: unless you want to experiment with weird cross-pollinated stuff, you can’t save seeds when you’re growing more than one variety in the same area. But still, in many cases that $3 pack of seeds can result in years of crops.

It’s still too cold to plant a lot of seeds straight into the ground, though the ground is mostly thawed in all but the shaded bed. I’ll be putting a few cold hardy seeds out there this afternoon: kale, peas, spinach, beets, radish, some lettuces and endive—essentially all the stuff that I put in the cold frames.

Speaking of, things are starting to pop up under those: the radishes were the first, of course (I swear you could grow those things in the dark), followed by peas (in the small planter-turned-cold frame against the house—it’s easily the warmest spot, so that makes sense), arugula, and some lettuces/endives

The garlic (Legacy, a hardneck variety) I planted in the fall has come up too: the shoots are over two inches tall in a few spots, chiefly in the bed against the house under the dryer vent. One things I’ve learned from backyard gardening is that microclimates can be extremely micro, indeed—and the cause is often due to man-made factors, like dryer vents or the ambient heat radiating off stucco.

I haven’t really ever started seeds indoors before—not to any great degree. Previously I just chucked the seeds in the ground when it was warm-ish and waited around for things to come up. You’d be surprised how successful—albeit erratic—that is. But now that I’ve got a good, expanding system of tidy garden beds, the effort of starting indoors seems worthwhile. Plus it’s way cheaper than buying a horde of starter plants from the greenhouse. 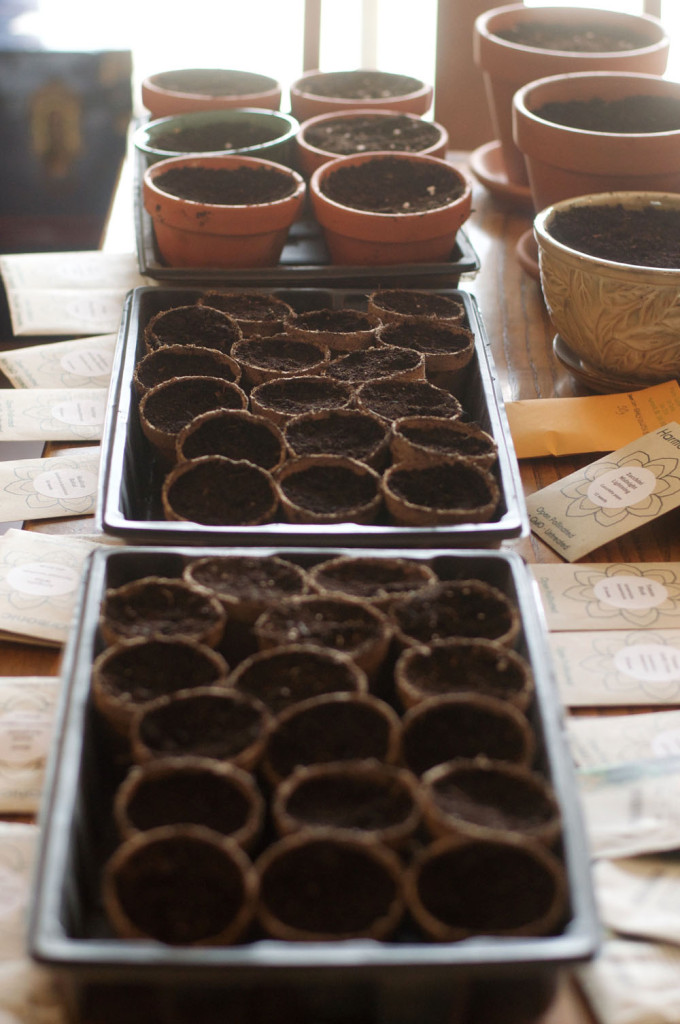 I meant to get some seeds started earlier, but was too busy this week with work and developing a random chest cold/laryngitis. (That’s twice in four months now, and this isn’t a trend I’m particularly enthusiastic about.) Yesterday I finally had time and energy to seed some of the small pots I had lying around. I started with tomatoes, zucchini, borage, skullcap, sunflower, assorted kitchen herbs, and squash. The squash is an experiment as the seeds were saved from a couple acorn squashes that I grew: Celebration variety, which is a hybrid, so therefore the fruit this year will be a wild card.

When I was filling the pots with soil it seemed like a lot of starters, but once I got inside and started putting seeds in them, I realized I could have doubled/tripled/quadrupled the number of starter seeds and still not been satisfied. The prospect of heading outside in May with a small army of seedlings, ready to flourish as soon as their little roots hit the ground, is extremely enticing. I may pick up a few more jiffy pots/seed flats and do another round of planting before the week is through.

At Seedy Sunday I also grabbed a few native flower seeds from the Edmonton Native Plant Group: nodding onion (Allium cernuum), saline shootingstar (Dodecatheon pulchellum) and meadow blazingstar (Liatris ligulistylis). It was difficult to pick; I could have bought everything they had but I also don’t have a lot of established permanent spots for perennials yet, since I’m gardening mainly in boxes. Plus, a lot of these native species like semi-shade—so they’ll do much better in the front of the house, facing north, whenever we get around to converting the lawn to garden.

Native plant seeds usually need cold stratification to germinate, so I started that yesterday. This is a process that mimics what happens outside in the early spring (i.e. it’s chilly and damp) which is the trigger for native seeds to germinate. You can just plant them in the fall and let nature take care of it, or if you didn’t get them in the ground in time (like me), you can simulate it by mixing the seeds into some damp sand in a ziploc bag and sticking it in the fridge for a few weeks. Fingers crossed it works. 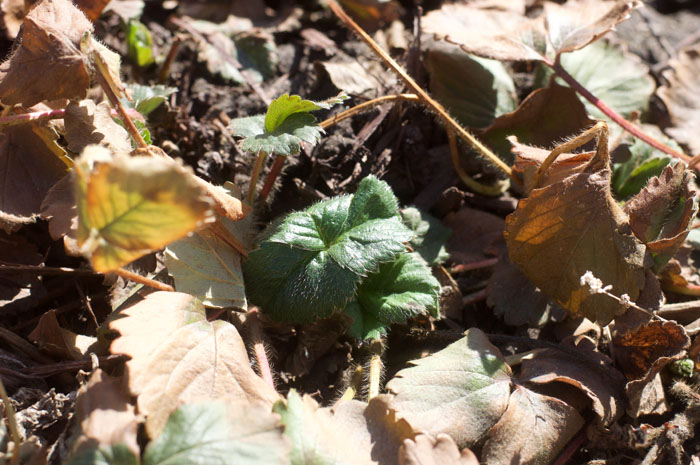 The strawberries are up.